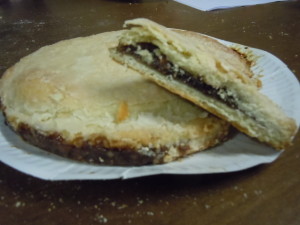 Text of the speech drafted by Umberto Curti and delivered by Luisa Puppo on occasion of the International Conference of IFC (Italian Film Commissions), Cannes Festival 2015.
Spungata… here it is, ready for its close up. Sarzana, a charming town in eastern Liguria, shares this gourmet glory with other Italian centres (e.g. Brescello, Pontremoli…). In Sarzana, pasticceri (pastry chefs) compete to offer the best spungata. It is a very ancient cake, whose origin could refer either to the Roman age (there are quotes in Ovidius and Petronius Arbiter) or the Jewish world (the recipe travelled all the way south from the Padan Plain to Lunigiana). Spungata is traditionally eaten at Christmas time, a familiar rite and a sign of good omen.As it does not feature yeast, it suits passiti wines, such as the excellent DOC Cinque Terre Sciacchetrà or the excellent DOC Riviera Ligure di Ponente Moscatello di Taggia. The recipe changes not only from town to town, but also from baker to baker. Some opt for puff pastry, others for brisée, others for short crust pastry. The filling varies, too, but honey and dried fruits are often to be met, given their symbolic meaning (honey is related to harmony, dried fruit to prosperity). True gourmets support artisan manufacturers who hand down the passion for excellence. So, Sarzana’s spungata is an image of 100% creativity and artistry of local pasticceri.

Spungata also tells a story of trade, routes, merchants, cultures and religions which represents the Mediterranean identity. Neapolitan novelist and screenwriter Raffaele La Capria once said that “There is more history in one small Mediterranean wave than in all of the oceans”. Today we are pairing spungata with Moscatello di Taggia, the heroic rescue of a white Muscat. Its vineyards cling to the verticality of the Riviera di Ponente, the western Ligurian Riviera loved by painters and novelists such as Claude Monet, Italo Calvino, Francesco Biamonti. There, among ancient dry stone terraces and walls, the sun provides grapes with colour and scents. Moscatello is an elegant vino passito (sweet wine), the ideal match for traditional short pastry biscuits (canestrelli, cobeletti, baci di dama), jam tarts (yellow fruits), even Triora’s cubaita. In the 16th century Moscatello was awarded excellent ratings by Sante Lancerio, pope Paolo III Farnese’s cellar man (sommelier). He wrote: “… it comes to fertile Rome from several provinces, by sea and by land, but the best variety is the one from the Riviera of Genoa, from a town named Taglia (i.e. Taggia)… golden in colour, not smoky, not too sweet yet pleasant, reminiscent of quince, not sourish”.

The Mediterranean sea, “the great water plain”, “the sea between the lands”. The word also embodies several symbolic values, linked to

Several economies, societies, states and cultures have cohabited the vast area between the Alps and Mount Atlas, the Dead Sea and the Atlantic Ocean in a setting of reciprocal influence. Therefore, the Mediterranean basin should be read as a multi-faceted phenomenon: not as a single landscape, but as a myriad of landscapes, not as a single sea, but as a sequence of seas, not as a single culture, but as the stratification of cultures – a millennial dimension encompassing everything and nurturing history.
The Mediterranean is represented by this amalgam of people, cultures, stories, plants and  animals. Uniqueness and diversity meet, pursue each other then merge, while food culture plays its role of common denominator.
Predrag Matvejević once wrote about “the old submerged ropes”, which poetry seeks to recover and knot together again. The harmonious beauty of the Mediterranean cannot be fully understood unless we approach its cuisines like ancient wanderers, recovering the ropes of its food, which osmotically intertwines with both landscape and climate. “Without Sicily, Italy leaves no image in the soul. Sicily is the key to everything”, this is what Goethe wrote in 1787. His words were echoed by Guy de Maupassant in 1890: “Everybody knows how fertile and diverse this land is, once known as Italy’s granary and which all nations, at one time or other, invaded and mastered”.